CLIMB AND FLY AT THE END OF THE WORLD

Patagonia, with its terrible and legendary wind is by no means a popular paragliding destination. In fact nobody has ever flown in Patagonia. That is why on the 31st December Aaron Durogati, all round paraglider and explorer with a mania for climbing and flying decided to head over there and have a look, together with Daniel Ladurner. The idea, at the beginning, was to smell the air. See what was doable, hoping in a window of good weather sufficient to climb Cerro Torre, and then to fly down.

During the month spent in Patagonia Aaron managed to climb the Whillans route on Aguja Poincenot, 3002 metres, but due to the strong wind he didn’t manage to fly. In fact: while he abseiled down his ropes even got stuck, forcing him to cut them. Fortunately a second roped party was nearby, making it possible for the two climbers to head back down. The second step was Aguja Saint Exupery, 2558 metres, climbed along the Italian route. On the peak, reached at 9.30 pm, there were no suitable conditions to take off, but after abseiling for 50 metres the situation improved. Taking off and flying in such a place after 15 hours on the rock face is no joke, in fact: no errors are allowed. But such a flight, intense and beautiful, in prohibitive conditions and right next to Fitz Roy, leaves a lasting memory. Especially when you land so close to the bivouac, and all you have to do is wait for your climbing partners to join you, at 3 am.

On the third window of good weather, Aaron climbed up the Aguja Guillaumet pass, where he attempted to take off from the glacier, but without success due to wind blowing in the wrong direction. He had to change side to fly, taking off from a very steep scree slope with the help of an alpinist he met by chance. The next day he climbed solo the 2170 metres of Mojon Rojo, quickly and lightly, taking with him only the essential. Once again, taking off from the summit was impossible, but just lower down it was possible to take off, flying right in front of the entire Torre group.

The trickiest flight? “Probably the time I returned to Aguja de l’S, after climbing the Fischer route” Aaron tells us. “First of all I flied tandem with Tommy to cross the glacier and head back to the bivouac. The following morning instead I managed to take off with Tommy and the 25 kilos of our back packs, flying to the bottom of the valley and saving us the hassle of the long descent. The landing was tricky: to avoid landing with all that weight, once we were ten metres from the ground we dropped our bags”.

The expedition ended on the 29th January after a little unscheduled event: a couple of days of fantastic climbing up the cracks of Cerro Colorado, in Chile, with Diego, a climber from Feltre met on site. Aaron went home without climbing Torre (there were never the ideal conditions to climb), but with many other experiences that have left their mark, which will be cherished forever. From life at base camp at El Chaltén, where new people were met, making new friends and climbing partners” such as Diego Toigo, Mirko Grasso, Tommaso Lamantia, Dimitri Anghileri and other Italians met on the other side of the the world.

"Flying in Patagonia is one of the most difficult things I have ever done" Aaron concludes "and I understand why nobody has practically ever tried it before. Combining climbing to flying is fantastic, but at the same time extremely difficult. This year, conditions for climbing Cerro Torre were not ideal: pity, but there is no reason to despair. Mountains never run away." 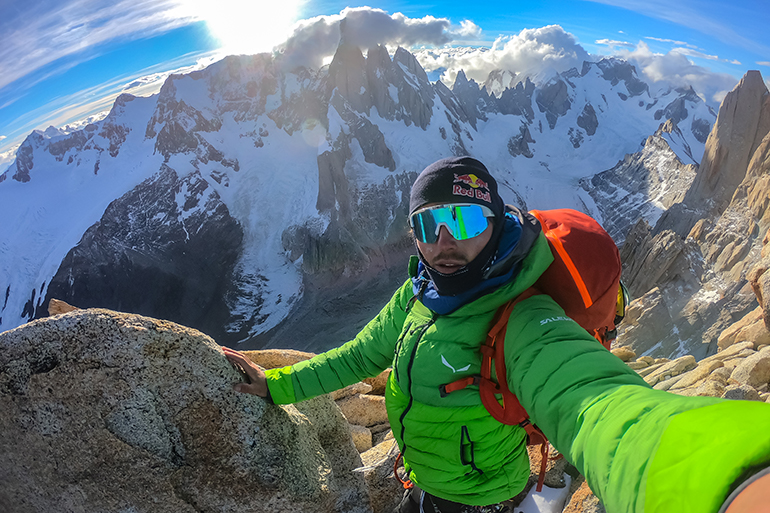