THE LESS, THE BETTER

Four slaps
Four slaps on the rock resounding loudly across the Dolomites of Lienz, in a wild and relatively not very busy area. Slaps, not hammer blows. Quite an unusual sound at least, unexpected. These are slaps, yet they are not an encouragement before a crux move, or an irritated reaction to falling off. They are precise, methodical, like hammer blows.
They come from the south face of Laserz, and the source of the sound alone may be sufficient to those who know the story of this rock face, consisting of roofs stacked on top of each other, to guess the meaning of that sound.

A decade ago
One needs to go back a decade in time. In July 2012 a couple of youngsters inspect the yellow-grey limestone of the south face of Laserz: it is David Lama and Peter Ortner. They are just back from the legendary first free ascent of the Cerro Torre Compressor route, a true mountaineering masterpiece. They are looking for new challenges, on their home turf and with an approach which is as pure as possible: if there is no need to place a bolt, do not use it- opening a route is not utilitarian, a progression from point A to point B – it is also and above all a matter of style, testament of one’s ability, but also of one’s ideals.
That is how “Safety discussion” was born, a route which is a journey, one of the many legacies David Lama left alpinism: ten pitches of continuous and sustained difficulties up to X- / 8b. Overall protection on the wall: six bolts, mainly on the anchor points. And that is where the four slaps all of a sudden make sense, for who knows the story of this rock face. 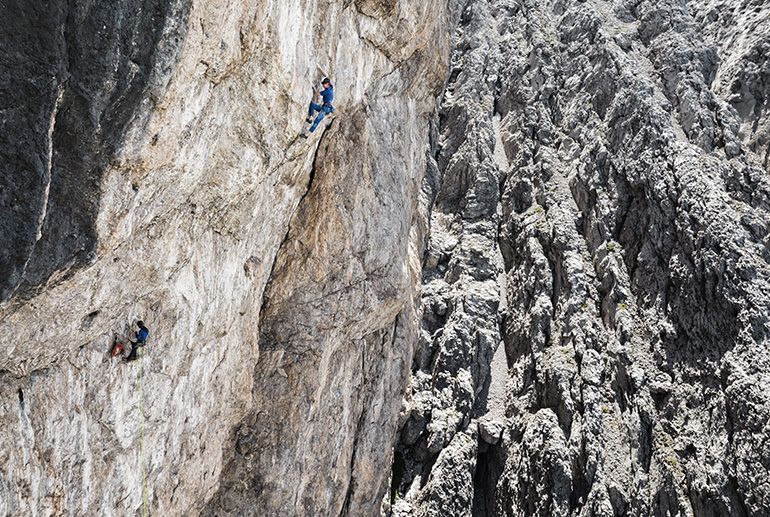 A cliff is not made for falling on
They are used for placing cliffs. It is on the eighth pitch, a long traverse of 8a+. There is nothing except a little hole, one of those holes that finding it becomes a challenge, and in that little hole a cliff is placed. A cliff is not a proper protection: it is a little metal hook, usually it is used for progressing in aid, or to help out when bolting. It is not made for falling on. And yet on this route, on this crux move, there is no other way. Louis carefully places his cliff, slaps the rock four times to make sure it is in position, and continues for a ten metre long traverse of 8a+. Only for ruthless people.

Louis Gundolf
Louis is like that: when things get tough, when the climbing is engaging - physical and psychological – when it reaches maximum level, he performs at his best.
He started climbing at a very young age, Louis Gundolf, with his father, who bolted kids’ routes on the rocks just behind home. This passion which was nurtured throughout his childhood exploded during adolescence. With the same intensity and dedication Louis started tackling competitions on plastic as much as climbing outdoors.
They seem like two separate worlds, alpinism and competitions, and yet there are some common factors, apart from the types of movement. The psychological pressure for example: one needs to have the ability to isolate oneself both during a competition as well as on a rock face, to disconnect one’s mind from noisy thoughts, and connect it exclusively to what is being done. Both activities require the ability, not so much to be isolated, but to enter a condition of deep focus in which reality is reduced to what that reality is relevant for me, here and now. Louis is exceptional in applying this to climbing. This is why he is at ease on terrain which apparently is so different. 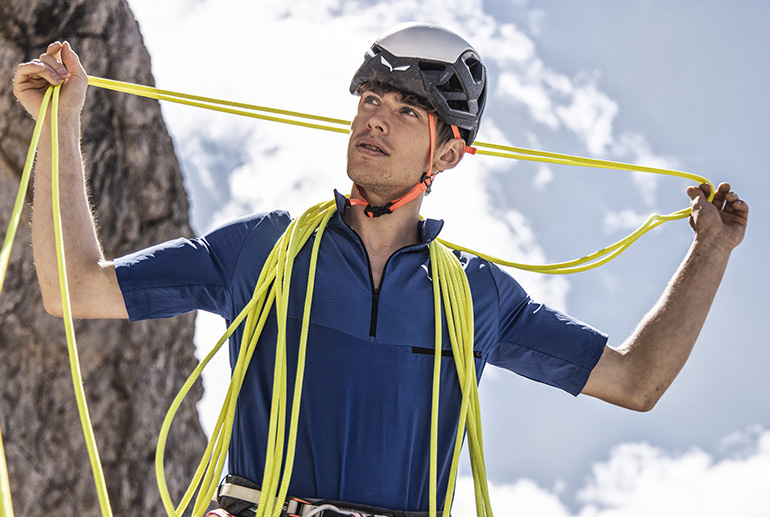 Less is more
It is a mental aspect, but also from the heart. What are the probabilities of falling on a move? What are the probabilities that the cliff comes off? And how do I feel in evaluating this risk? How do I deal with this uncertainty, how does it make me feel?
This is what flow is all about. It is not a matter of “not being there”, of ignoring the risk and focusing exclusively on the movement, on the performance. On the contrary: it is about being present with oneself – to the part which is in the moment. Less is more – but in a reasoned manner. It means choosing what thoughts to carry with us onto the rock face, the same way we choose what gear to bring with us: how many cams, what size, how many nuts, how many cliffs…
Less, but exactly what is necessary.

It is a matter of having fun
Louis catches his breath, he shakes his forearms. The wall is overhanging and gives no respite- a familiar type of terrain, for which he has specifically trained for, even thanks to competitions. He finds the next edge, he squeezes it, he strategically places his toe on an almost invisible hole. A quick cross-over, and he keeps going. Louis smiles: he has climbed the crux. Now there is another one, and then another one, and then another one. He smiles because he is happy being in his element, both physically as well as mentally. Climbing is a bizarre activity for many aspects, not least for the pleasure which exertion and risk can give you - which can be calculated, foreseeable and reduced, but never totally eliminated, at least not in the mountains.

The free ascent
It took two attempts for the free ascent. During the first one Louis fell on one of David’s pegs, which came out and now hangs off his car’s rear view mirror as a memento and a lucky charm. But on the 31st August 2021, on his second attempt, together with Jonathan Lechner, Louis became the fourth person in the world to climb “Safety Discussion”. Almost a decade after it was opened – and this says a lot, about the route and about Louis.
The best results, the ones that make a difference and the ones we remember with more satisfaction, are the result of hard effort, determination, commitment. But there is more. There is the ability to be silent, to disconnect to reconnect, to be present with oneself, here and now. To pack one’s backpack nicely, deciding what to bring, leaving noise and distraction on the ground. There are routes like this: for the free ascent you have to be truly free. 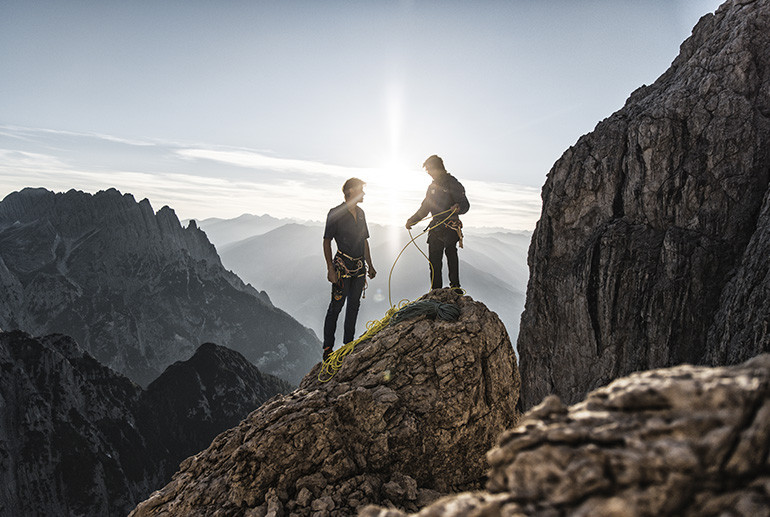