“Let’s go! Get up!” It’s 10pm on 31 October 2018. Things are slowly beginning to move inside the two-man tent on the foot of the west ridge of Himjung at 6180 metres above sea level and packed with three climbers. Sebastian Fuchs gets out of the tent, motivated to the full, and starts to boil water, while Stefan Larcher and Vitus Auer doze off for a few minutes more before realising that they can’t keep hiding in their sleeping bags forever. The team of three mountain guides have ambitious plans: They want to be the second rope team to ever climb the summit of Himjung on the still untouched west ridge. It’s a wonder that this seemingly unique route has never been contemplated before. Unique, because an almost continuous overgrown firn ridge leads over the long, rocky west ridge to the steep summit structure. They don’t expect great technical difficulties, but you never know what to expect on a first ascent.

On both of the three-day acclimatisation tours, they already checked out all possible climb variations with their binoculars. Originally, they wanted to reach the summit via the likewise still untouched and even longer southeast ridge, but this project was thwarted by the Nepalese government, as they weren’t granted permission to approach via the east side of the valley. After some last efforts in Kathmandu, trying to obtain the permit after all, the three mountain guide colleagues ultimately decided with a heavy heart to set up their base camp on the west side of the mountain. All of the research and mental preparation for the original project was now in vain and the tactical plans had to be interpreted anew. “Accept and rethink” was the motto. In general, many things went quite differently than planned on this expedition. This new situation, however, also brought many benefits. On the one hand, the base camp is ‘only’ 5 kilometres away from the foot of the mountain and there’s virtually no ascent on the way back to said BC. On the other hand, there’s a greater range of possible ascent routes. The possibilities for acclimatization tours are also more diverse due to the four 23,000 ft peaks in this valley.

The final preparations are underway. The team is well coordinated by now. At 11 o’clock sharp, they leave Camp 1. Sebastian and Stefan set off extremely motivated until they slowly find the right tempo a few minutes later. A steep upturn leads to the firn ridge, which flows into a 55° steep firn flank. Each of them climbs on his own. It’s pitch black, only during the second half of the night, the moon begins to light the way. The conditions are perfect and the difficulties not too challenging. And yet, full concentration is required. Everyone knows how steep the mountain drop is in all directions. Slowly, the mountaineers’ beams of light move higher and higher, before they reach the highest point of the west ridge at 6609 metres. After a short break, they continue further on the sometimes flat but often 55° steep firn cornices of the ridge. Their fear that the 50-m-long rock passage on the ridge might be very brittle is confirmed. But it can still be climbed without a safety rope and thus at quite a swift pace. The lack of sleep and the high altitude take their toll on the fatigue. After around 6 hours, the team has reached the deepest incision on the ridge and decides to take a longer break. However, the wind and cold temperatures make it very uncomfortable. Sebastian and Vitus crawl into the two-man bivouac sack and Stefan digs his pickaxe into a small snow alcove. The next 30 minutes are really awful, cold and windy. All of them doze off slightly until they decide to continue on further as they couldn't really get much rest here. The mountain now steeply towers high in front of the three climbers and the wind really starts to set in.

“Precipitation looks good, temperatures are within the normal range, but it’s the wind that worries me”, says Karl Gabl to the team in a telephone conversation on 30/10/2018 in the base camp about the weather forecast. Sebastian, Stefan and Vitus actually wanted to cross the mountain in 4-5 days, with tents, sleeping bags and the necessary food provisions plus several high camp points. However, there wasn’t enough time for that as only one and a half good days were forecast. They were already acclimatised, had put themselves through a lot of effort and now, according to the forecast for the ongoing period, the jet stream would be blowing at 90km/h for up to 7000 metres. “Is that it now? Do we have to just drive home empty-handed? We have to give it a try!” The tactics were reviewed, and along with some light luggage, they wanted to be back at the base camp in just three days.

The team found themselves just 200 metres below the summit. After a very steep upturn, which they had secured with a 60-metre climbing rope, the ridge was slightly flatter and everyone once again climbed on their own. The wind was now blowing at 50 km/h with strong gusts, making the ascent noticeably more difficult. Everyone has the weather forecast and the predicted jet stream in mind and simply focuses on climbing as fast as possible. The situation is getting serious,a possible withdrawal would be difficult and complicated. Hopefully the team can reach the summit before the wind gets too strong.

"The wind was rising and the cold was creeping in through the thick clothes, it was time to move on. I continued on. The steepness of the ridge increased to 55°. Yet another gap traversed over in the style of a vole. The ridge seemed endless. I’ve never puffed and panted like that. This kind of tiredness, this fatigue, it was completely unknown to me."

At 9am on 01/11/2018 the three of them stand at the summit of Himjung in a sudden calm, congratulating each other and admiring the unique view. A long-awaited dream is coming true.

After a long rest just below the summit, the descent over the unclimbed north ridge begins. Full concentration is needed once more for the long crossing below the distinctive craggy rocks. As is often the case, Sebastian climbs ahead. All three are suddenly very tired, the altitude has a tight hold over them. A climb on the ridge uses up the last of the energy reserves, before they finally reach the glacier ridges, over which they can quickly descend several hundred vertical metres and finally recover from their hardships.

The glacier ridge ends on a high, brittle rocky cliff the team had not anticipated. After a lengthy search with a lot of risks and under giant ice towers, they find a way out of the dead end, and by sunset the team reaches the Himjung glacier. The last counter-climb takes everything out of Sebastian, Stefan and Vitus before they reach the campsite around 8pm.

The next day, heavy snow flags adorn the surrounding 7000-metre mountain, warning of strong wind. The three men arrive at the base camp, tired but happy, at around 4pm.

The expedition was the first big experience with high mountains for Stefan, Sebastian and Vitus in the Himalayas. “We began as a mere special-purpose partnership but came back as friends.” 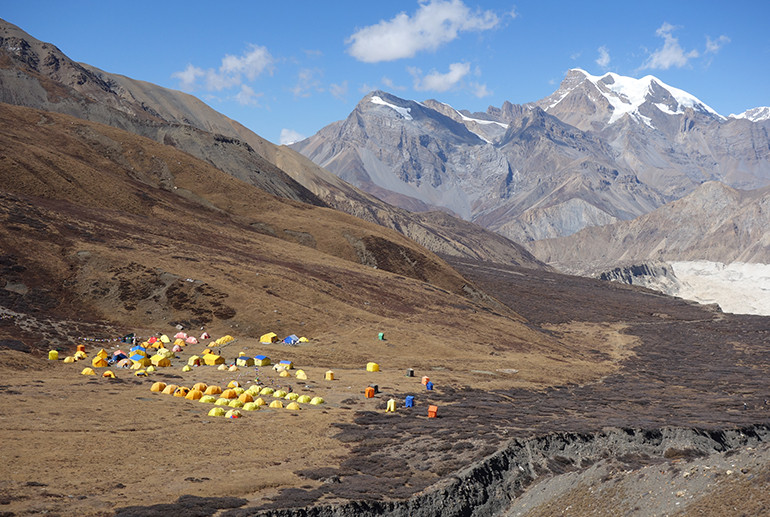 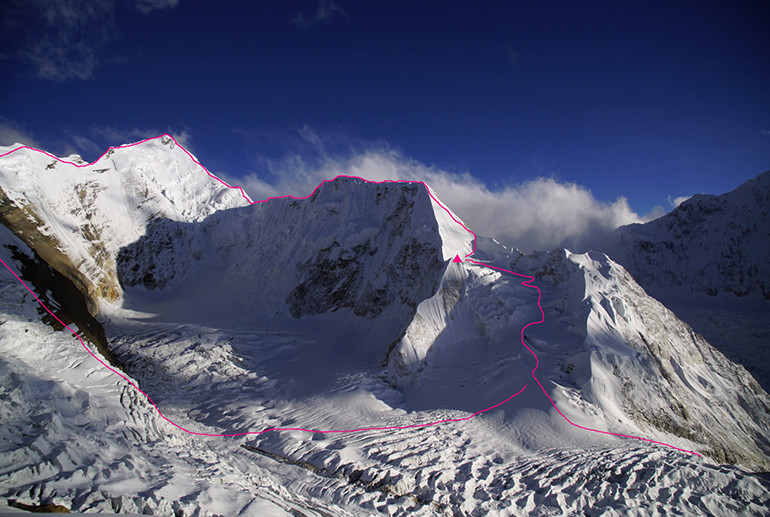 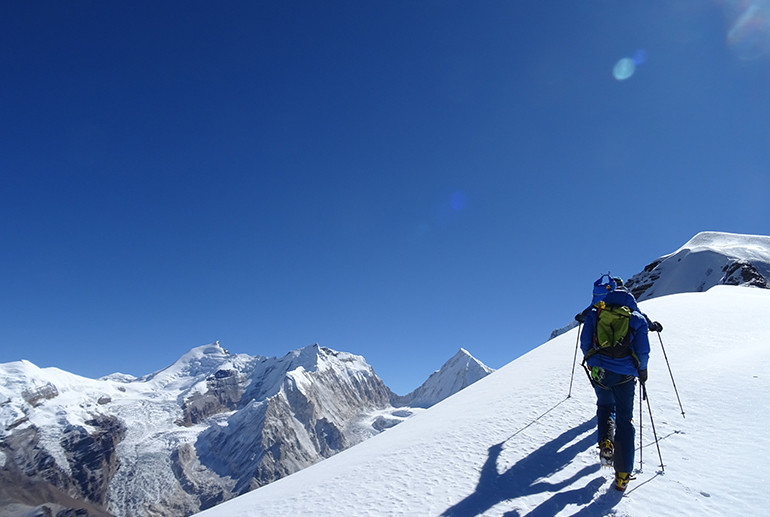 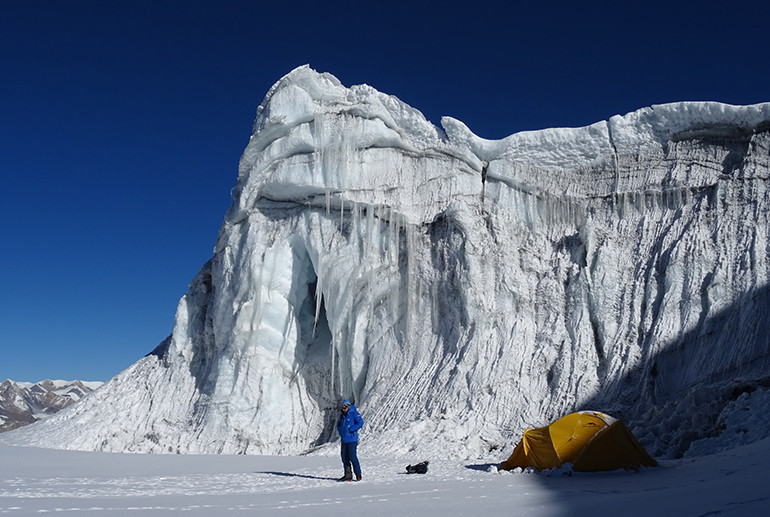 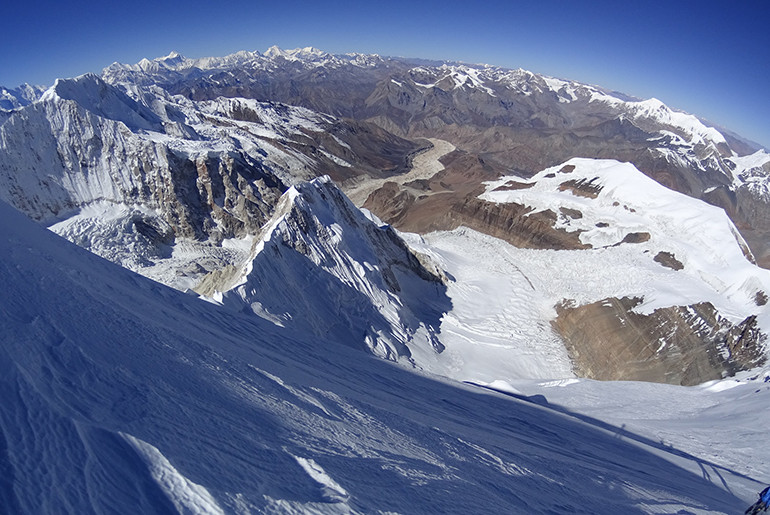 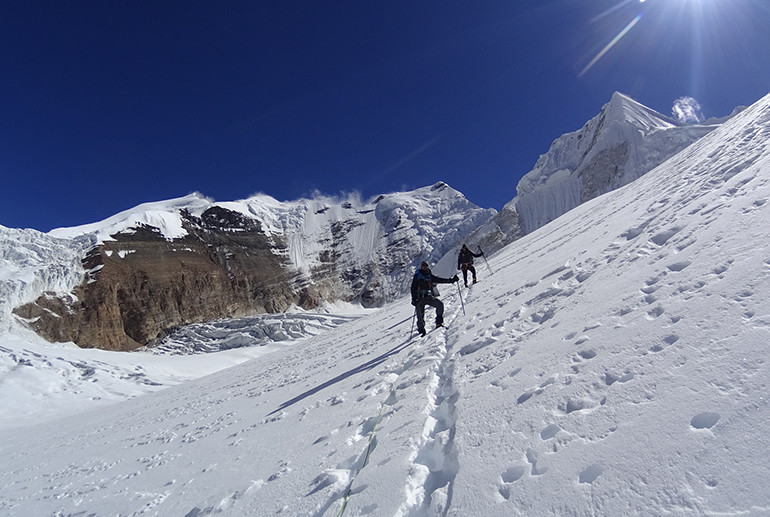 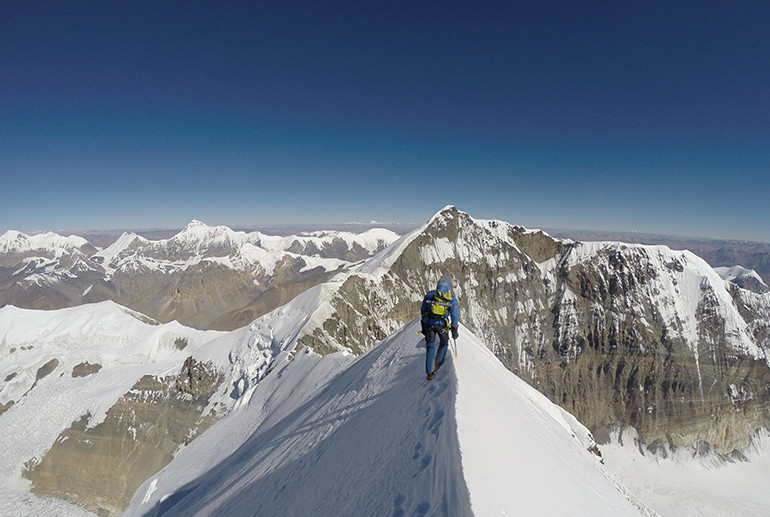 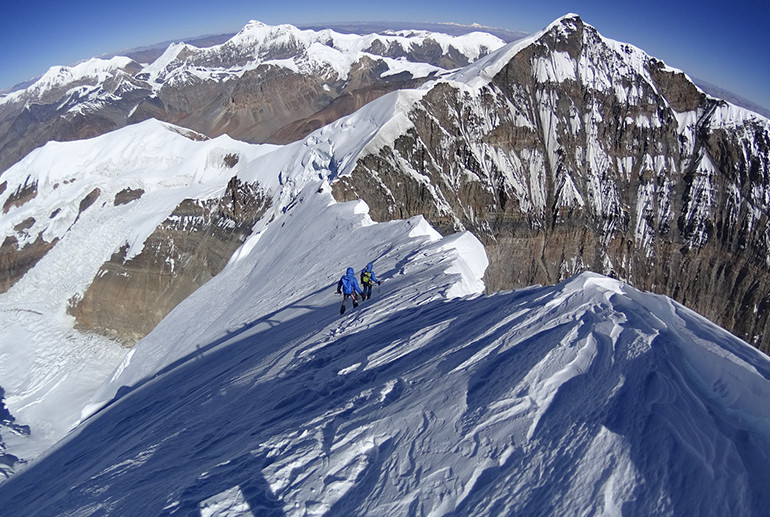