Markus Anders and Nicolas Manthos alone in the Indian Himalayas

As 2019 came to an end, Markus Anders, Red Bull X-Alps competitor and SALEWA athlete, together with partner Nicolas Manthos, set off for India on a mission to discover the mountains and soar the skies above the Himalayas. Both paragliders had their sights set on the distinctive Menthosa Peak (6,443m) in the Lahaul valley. Markus Anders, originally from Swabia, Germany, moved to Chiemgau, a region bordering Austria, at the beginning of 2019 so that he could increase his focus on training for the legendary X-Alps race from Salzburg to Monaco. As his journey came to an end, he returned home, taking unforgettable memories, moments and images with him. Having already embarked on several adventures together before, Markus and Nicolas, who is a climbing and flying - paragliding and wingsuit - addict, just like his friend, see themselves as a strong team. Their most epic project so far took place in Oceania: they spent three weeks hiking and flying around New Zealand's southern mountains. And they did so by fair means and independently, always carrying their entire equipment and food stores with them.

The pair, who started their flying ventures together way back in the past, set similar parameters for their India project at the end of 2019.
Markus came up with the idea for this hike & fly adventure back in 2018 when he had the chance to discover the Indian Himalayas for the first time. Conditions were optimal in October, after the Region's wet season had ended. Anders, who was 19 years old at the time, immediately became fascinated with the colossal mountains and resolved to scale some of the giants. When he told Nicolas about his plans, his friend was wholeheartedly on board from the start.
Both of them love stripping down to the bare essentials. They wanted to be self-sufficient and independent, just like in New Zealand. “Our climbing gear, bivouacking equipment, paragliders and food - that's all we need,” Markus explained. No cars, no carriers.

The two athletes had their sights set on Menthosa Peak in the Lahaul and Spiti district. “Once we have become acclimatised in the famous Bir Billing region, our plan is to fly around 150 kilometres north to get closer to our goal. We estimate that this should take us around two days,” explained Markus shortly before the project got underway. They planned to topland at between 5000 and 6000 metres and set up their base camp there. If conditions were good, it would only take them a short time to scale the rest of the way and then they could climb back down to camp and fly back to Bir Billing. That was the plan. For this adventure, Markus and Nicolas chose to use only highly-functional, lightweight equipment made by us South Tyroleans, Salewa, and Skywalk. Their packing was structured and precise and the two flyers arrived in Bir Billing to get their project started with no unnecessary weight in their bags.

In October and November, as well as in March and April, the hike & fly scene comes alive in Bir Billing and Markus and Nicolas saw some familiar faces whilst getting acclimatised in the paragliding region.
After a few days of hiking, flying and coming to appreciate Bir's perfect conditions, the pair set off into the back country. They packed for 2-3 days and got an early start to their take off point, carrying their tent, sleeping mats and sleeping bags. Due to a small hailstorm, they had to land earlier than planned and then quickly set up camp among goats and sheep in a meadow above the tree line. And it wasn't just the athletes who were thankful that the tent had gone up in a flash. A small, brazen sheep decided to make itself comfortable under the awning.
The shepherd also took an interest in the tent. Markus and Nicolas got the impression that he would have happily swapped his own house for a tent and sleeping bag. “The first night spent at 3600 metres wasn't so easy. The shepherd woke us up at around 6am. We gave him the energy bars we had left and set off to the take off point early, which was located just 200 metres below where we had spent the night,” recalled Nicolas.

After a restless night, they then covered 180 kilometres in the air. And they were becoming ever more determined to get on their way to Menthosa Peak, but the pair still had some more acclimatisation to do. Even higher mountains came into view and they encountered an unexpected thermal, jagged glaciers and changeable banks of cloud. They flew close to snowy ridges and toplanded in deep snow.
Markus and Nicolas' journey to reach 5000 metres - 5,177 according to the GPS - was filled with more feelings of elevation and exhilaration. Were they the first ones to reach this unnamed summit? Tracks which may have been left by a snow leopard disappeared behind a ridge. There was no time to search for other tracks, as the day was nearing its end and there were still more indescribable moments to come.

Markus and Nicolas made good use of the window of calm weather between new snowfall and strong winds, taking this time to become more acclimatised to the altitude. After an extended, intense ascent with an unpredictable thermal and waist-high snow, chilly hours spent in a small town near Manali were to follow. They spent time at hot springs to recharge their batteries. And, of course, they spent time preparing for their real goal - Menthosa Peak.

And this real goal was coming ever closer. Once again, it was the weather that made their decision for them.
Markus and Nicolas packed up their belongings - 35 kilograms all told - and, accompanied by rain showers, set off on their climb towards Patalsu Peak, close to the Rothang Pass.
The following day was forecast to be beautiful, with optimal conditions. It was looking unlikely, but, sure enough, the two athletes were greeted by clear, sunny skies the next morning. They were able to dry their equipment in the sun and were pleased that the weather seemed to be on their side for the home straight.

They arrived at the take off point at 10am and conditions were in their favour: the two friends were met by a 20 - 25km/h southerly wind.
“We weren't allowed to fly too low over the military zone. We didn't want to risk anything,” recalls Markus. The route was clear to both of them and a strong thermal carried them above 6000 metres in less than 30 minutes. At this height, a bitter cold hit, but an extraordinary view across the mountain landscape made the temperature seem a little less intense.
On their way to Menthosa Peak, 45 - 50km/h winds forced Nicolas to perform an emergency landing close to the restricted military zone. Luckily, he went undetected. It would have cost them too much time and effort to make their ascent from the bottom of the valley.

The team met at the Rothang Pass, set up camp and shared some soup and cous cous. At this point, they changed their plans and Menthosa Peak slipped out of reach. The next day brought good conditions and they flew to Deo Tibba, a 6000m high mountain in the Kullu district. The mountain was covered in masses of snow which prevented them from toplanding on the plateau. And so Markus and Nicolas aborted their mission and turned back to Bir Billing, where they had originally started their journey.
They managed to demonstrate that mountaineers and paragliders don't need much to set out on an expedition - in fact, they successfully showed that you can get really far with just 35 kilograms. Though perhaps not to the summit they were aiming for.
But ultimately, the weather always plays a crucial part. 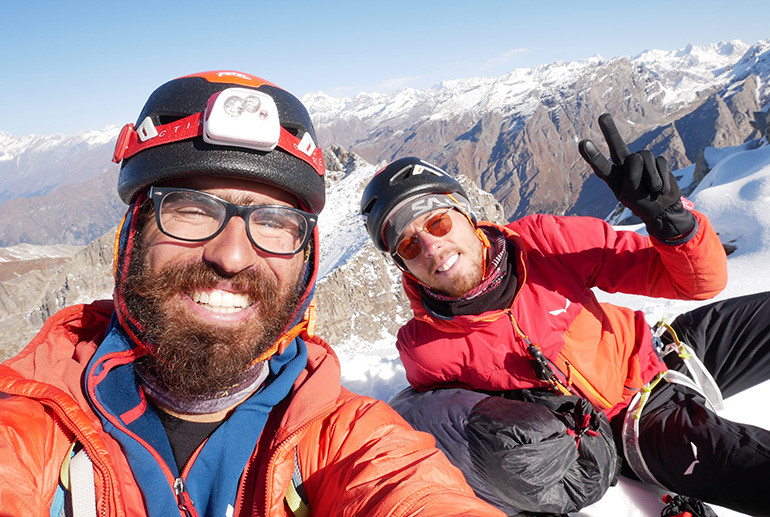 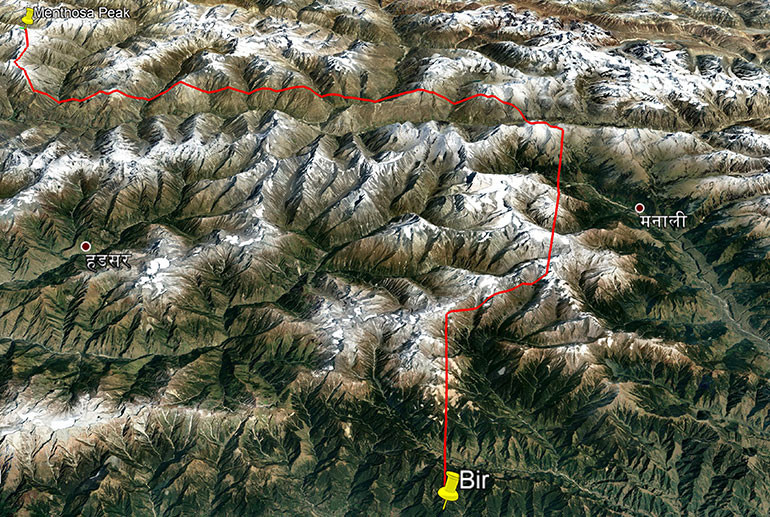 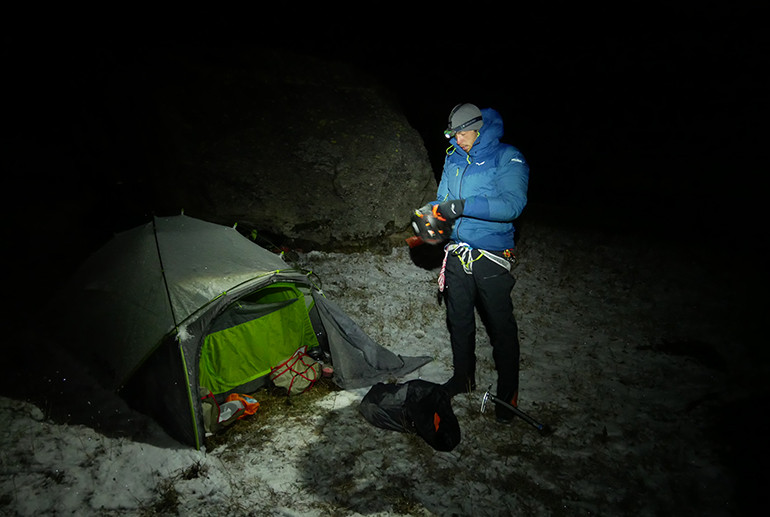 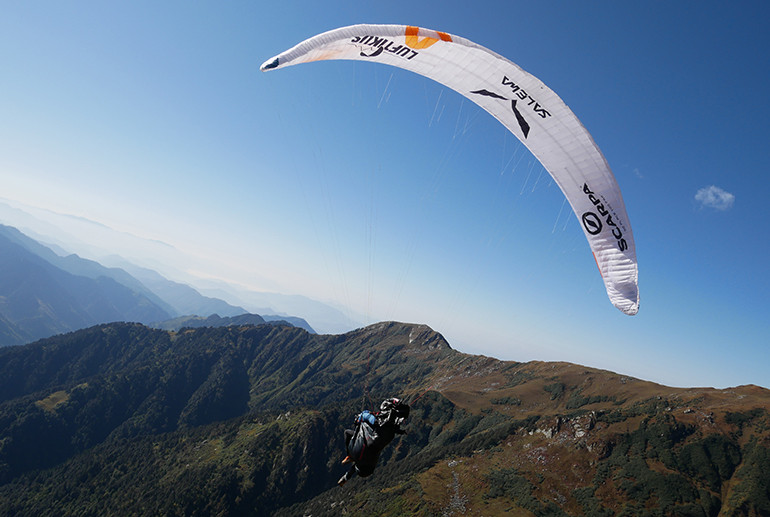