"I want to go to check out Norway in April. Want to come?"

These were Marco’s words during a lunch on a normal day in January, after we had bumped into him and Alice on the slopes of Cortina, where Carolina and I work.

We didn't take the invitation too seriously. Partly because it was rather light on the details. But more than anything else, because it threw up a set of unknowns, starting from fitting in the trip with work commitments to money issues, as Norway is a notoriously expensive destination. Yet one thing was certain: the seed had now been planted in our minds. And by doing our homework, we could get something definite organised, something that was low-cost, low on frills and without guides and travel agencies.
Without even having the time to formulate these thoughts, Alice was on the ball. She called us to fill us in on bookings, dates, photos of the itineraries, photos of a cool Scandinavian accommodation option and a budget that was completely below what we were expecting. A less-is-more eight-day trip in Lyngen, complete with an apartment, car and a guide book.

It goes without saying that we accepted, and then suddenly it was April. We were really excited, even though we were in bad physical shape after a winter spent going downhill rather than uphill. It did raise a few doubts. But you know how it is, starting at sea level is always easier...

With our flight delayed, we got to our accommodation at about two in the morning. We found the apartment blanketed in almost darkness, although we could still glimpse a landscape without vegetation. This was after a car ride along a road flanked by a dark sea and steep walls, on which I tried to imagine shapes and peaks.
When you embark on an eight-day trip, you want to take make the most of every day. So, without getting up too early in the morning, we wasted no time and set off on the first easy route, the Storgalten, a warm-up with a 1,200 m climb at the top of a fjord. Although we had to start from somewhere, not even being able to reach the peak of an overcrowded route in the thickest of fog didn't exactly fill us with enthusiasm. After a snack, we attacked another face on the road home. Yet there would be no peak for us this time either. However, the information we were about to receive would put a nice spin on our adventure.
Number one: look around. Put the guide book down, and from the road you can see a plethora of huge couloirs, summits and peaks.
Number two: if the weather is bad on one face, it's nice on another. The fjords are narrow and long and the mountains act as a barrier to atmospheric disturbances, like the Brenner.
Number three: in April, the days are very long and the sun doesn't change the conditions all that much. No other way around it: you have twelve hours to go and get yourself in trouble.
The most important rule of all, however, is that the various approaches and scrambling climbs are never-ending, especially for people who are used to the Dolomites!
This is a summary of how things went for people who stepped up to the challenge, without really knowing much about the place, yet used their brains, more or less, and flew low. People who collected information whenever possible, with the weather and the guide book in hand.
For once, in my case at least, we were not looking for the best results in terms of the difficulty of the ski slopes, routes and climbs. Above all, our aim was to explore a new place without any personal expectations, following the rhythms of the days by immersing ourselves in nature - still quite wild in some places. All this without being intimidated by the weather or by an urge to do something epic that we could live to tell the tale about (even though, in one way or another, we did get that). When a group like ours uses its knowledge to come up with routes in a new place, then the victory already lies in the doing, in being able to complete five out of seven routes without seeing a living soul in the vicinity, such a popular destination for ski mountaineers!
When all was said and done, the experience turned out to be incredible and positive. The Tafeltinden glacier peak gave us an indescribable view over everything. The Goalborri mountain summit offered a set of breath-taking ledges. The Godmother of all couloirs provided an approach that was crazy in all of its meanings. The Tomas couloir featured a last burst of winter, while our attempts at the Fugldalsfjellet and Salama couloirs offered a taste of spring and a pretty good excuse to go back.
I would need quite a few pages to describe each of these routes in detail. But, all things considered, this is no report, nor is it a celebration of any extraordinary performance.
What I want to say is that achieving an ambitious goal is not always the factor determining the success of a trip. In my case, it was actually quitting the Godmother that taught me that the important thing is to try, to get off the beaten track and to push yourself a little beyond your limits. The pursuit is a goal in and of itself.

Thank you Carolina, Alice and Marco for your patience and for sharing these wonderful days with me.
And of course, thank you for your love and never-ending desire for the mountains. 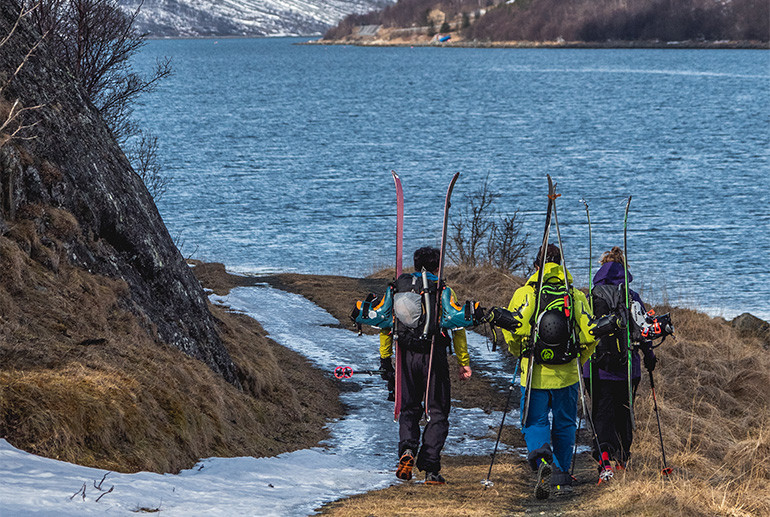 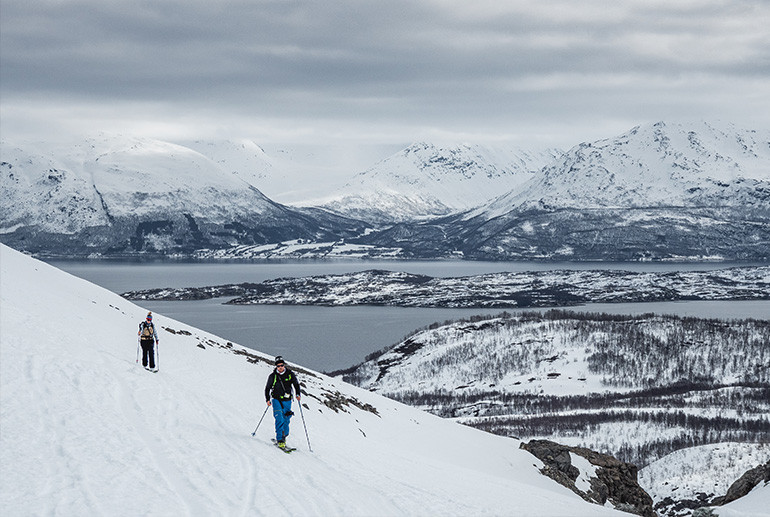 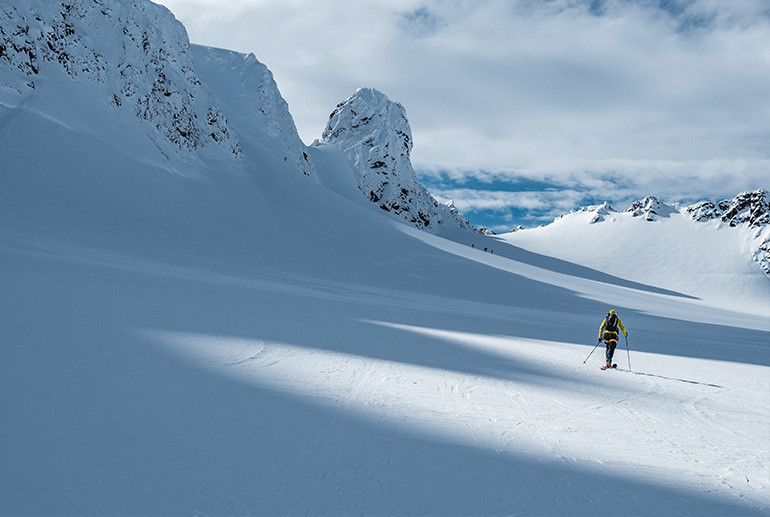 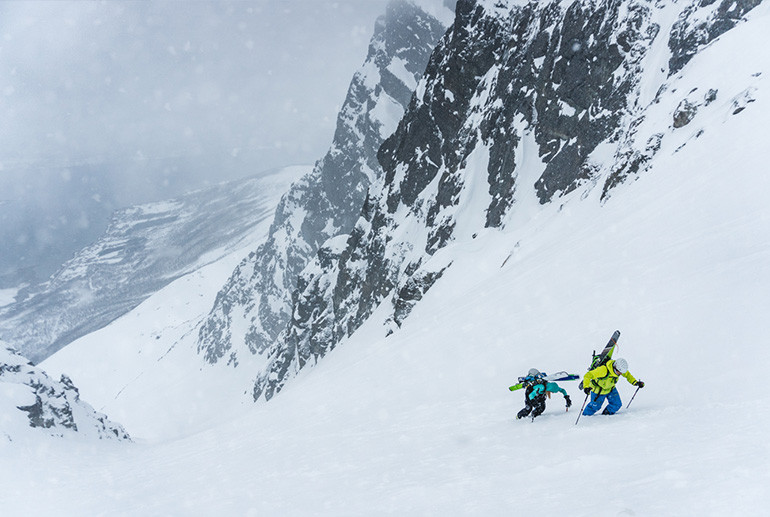 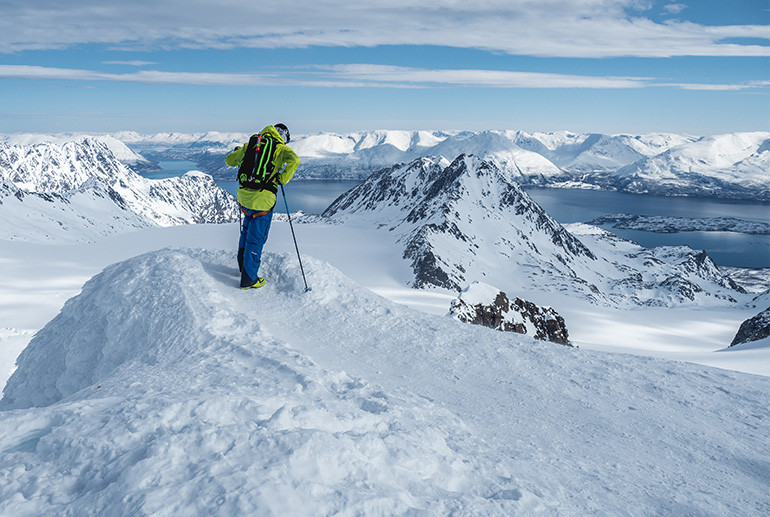