“For a long time I had wanted to concatenate these two mountains, symbols of the Valtournenche, in a single day. It is a little dream come true, another source of immense satisfaction. Nadir and I got along great. We climbed well and with precision. I hope that this is just the beginning of many more adventures that we will have together on the mountains."
- François Cazzanelli

Cazzanelli has repeated and opened various routes on Mont Blanc, the Matterhorn, Monte Rosa and in the Valtournenche Valley. He has taken part in over twelve expeditions outside of Europe, from the Himalayas to China, Alaska and the Antarctic and Argentina's Patagonia. 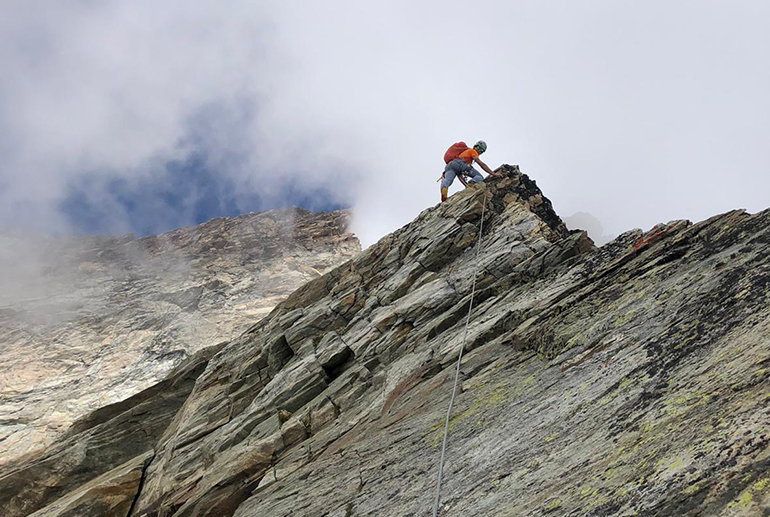 Cazzanelli relied on his "partner" Nadir Maguet to better manage the aerobic part of the project, who brought his experience as a leading athlete in the world of ski mountaineering and sky running to the team.

"This year, given the lack of competitions, I wanted to spend a bit more time in the mountains to discover a new world. When François put forward the idea of this project to me, I accepted immediately. We trained together a lot and we had great rapport from the start, which was confirmed on the day of the concatenation of these two wonderful peaks in our home mountains. For me, it represented a new world as well as a chance to broaden my training as an athlete. I would like to continue in this direction in the future. I also hope than I can do more projects with François."
- Nadir Maguet

Nadir, or Mago as he likes to be called by his friends, is a young talent from the La Sportiva Team. Born in Aosta in 1993, he is a member of the Italian Ski Mountaineering Team who turned his passion for mountain sports into a hugely satisfying job when he became part of the Courmayeur Centro Sportivo Esercito.

High altitude adventure
Cazzanelli and Maguet set off in the night between 20 and 21 August 2020. They were scheduled to meet at 2:15 am in front of the Church of Cervinia (2,050 m). Headtorches on, they climbed to the Colle del Breuil (3,332 m), then continuing onwards in the dark of the night towards the Matterhorn. The two men took the "Diretta agli Strapiombi di Furggen" route (4,478 m), reaching the peak 5 hours and 20 minutes later. Next, Cazzanelli and Maguet descended the Cresta del Leone, until they reached the Duca D’Abruzzi shelter (2,802 m). From there, the men moved to the base of the Cresta Albertini (2,500 m), proceeding to climb along the Cresta Albertini until they reached the Colle delle Grandes Murailles (3,957 m). Then, they arrived at the Dent D'Herens (4,171 m), taking the eastern ridge. From the start of the route to the peak, it took five hours in total. The journey continued, descending along the Cresta Tiffenmatten until reaching the Aosta shelter (2,788 m). Lastly, Cazzanelli and Maguet continued their descent into the Valle Valpelline until reaching the Prarayer shelter (2,055 m). They did it all completely independently, carrying their own kit!

A project of several hands
Express Dream. This is the name that Cazzanelli and Maguet chose for their Matterhorn and Dent D'Herens concatenation project. The idea grew out of a desire to put themselves to the test, in a pure and straightforward manner, up on the mountain they know best. The one that saw them grow up. Yet this was no pursuit of an umpteenth record. Rather, it was an attempt to visualise a route and to commit fully to achieving the end goal.
Many partners wanted to support this project: La Sportiva (both athletes' sponsor), Cervinia Valtournenche - Ski Paradise, Vinosteria Antirouille, AeO Chatrian and the Prarayer shelter. François Cazzanelli is also an ambassador for Salewa, Garmin, Julbo, Dynafit, Wild Country, Grivel, and Les Bières du Grand St. Bernard.
The Rudy Project, Camp Cassin, Compressport and ATK chose his adventure partner Nadir Maguet to endorse their brands. 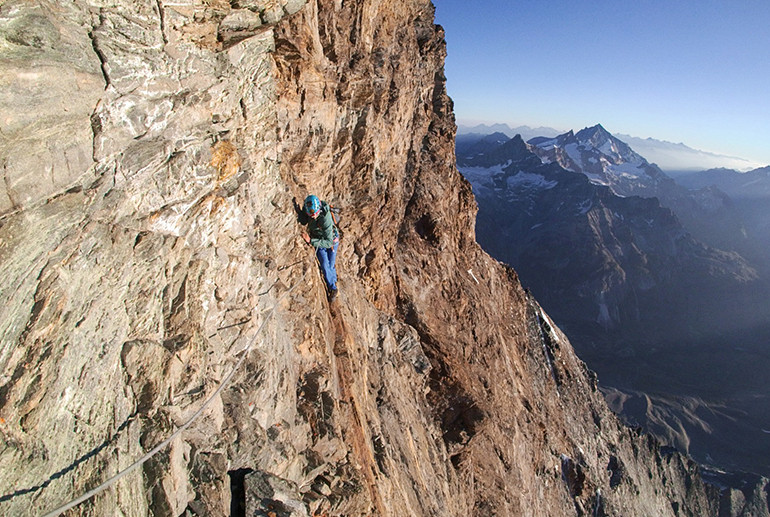