When we travel through mountain ranges, we feel tiny in relation to everything else: this is what trekking is all about. We carry a small home upon our shoulders, with a vast space around us to explore in total freedom. It is so important to have zero impact on the environment, to be gentle and to immerse ourselves quietly in nature. This is how we at once get familiar with the surrounding territory. We have the privilege of only hearing the charged voices in the most isolated communities, voices which are still able to relate and convey the lands that they inhabit and watch over with simplicity and emotion. Many of our stories also come about in a small yellow tent, where we fall asleep in the early evening and wake up in magical places. We try crossing on foot when the mountain passes are still closed. Not only do we walk to get from a to b, above all we walk to feel good and learn about different cultures. Trekking is energy, it’s life. It regenerates our bodies. It is a calling to nature, where everything is associated with pureness. Back in the city, we often have to adapt our lifestyles to follow strict rules and paths, whereas in the mountains we can express ourselves. We can relax. And as soon as we reach altitude, that originality which sets us apart comes alive once again. We have small daily goals and the sole true purpose of gathering the stories of minorities.

We have returned to trekking the Balkan routes. After travelling all over the Carpathians in 2016 and, more recently, capering about between Slovenia and Istria, this time we went hiking through the Dinaric Alps. It is the mountain range that “overlooks” the Adriatic Sea, starting from Slovenia and ending in Albania, passing through Croatia, Bosnia and Herzegovina, Montenegro and Kosovo. We were playing at home: Glorija speaks the local language and we did our best to collect brand new stories from the people who live in these mountainous lands.
We stopped off in three specific areas along this line that, for simplicity’s sake, we can call “from Sarajevo to Skopje”: the Bjelašnica mountains in Bosnia, which are just a stone’s throw from Sarajevo; the Durmitor National Park, a mountainous massif in northern Montenegro with the Bobotov Kuk peak, the highest in the group of mountains that reaches 2522m a.s.l.; and Prokletije, more commonly known as the Albanese Alps, a cluster of mountains located on the borders between Kosovo, Montenegro and Albania, where the major mountaintop is Maja Jezercës (2692m a.s.l.), which is also the culminating point of the entire Dinaric Alps.

We usually go trekking at the beginning of each season, more intensively so in spring and autumn. We anticipate things, travelling when there are few people around, especially when the activities of those who experience the mountains on a daily basis largely return to the open air, or when they intensify upon the imminent arrival of winter. We certainly like to document transhumance. When the shepherds leave the valleys for the mountain pastures and when they return; when the women, children and men methodically and respectfully milk their animals; when sowing and tending the garden begins in the new year; when firewood is collected or when the villages get together to help each other to fix paths and roads damaged after the winter. We often cross plateaus marked by long tongues of snow that can withstand the heat of the sun. We try to avoid trampling on the colourful blooms in the midst of the meadows and clearings, especially the crocuses that blossom in purple and pink, as they announce the arrival of spring. Or we have fun when the warmly-coloured autumn leaves fall from the trees to conceal slippery, elusive roots, all the while giving that pleasant soft sensation in the underbrush.

Travelling “out of season” is, alas, increasingly becoming more complicated. For better or worse, this makes every Altripiani adventure project unique and unprecedented.
Lately, we have encounter real difficulties in our itineraries due to climate change. As always, we try to get the best from the tentative lines that we sketch out on the mountains. We want to “collect” smiles, but increasingly we end up with totally re-drafted plans. It can be a tiring process. It’s all in the name of course: after all, the project is called Altripiani (the Italian for “Other Plans”). Yet this play on words only came from being “too’’ welcoming and, as a result, to forging those relationships along the way, which in turn generate continuous stimuli - sharing a meal, spending the night at a really hospitable person’s home and stopping to lend a hand to a lovely family in order to better understand their culture and traditions. Nowadays, however, our plans tend to change because of the weather. There is still a lot of rain, mud and snow this May, so there are fewer people in the upper hamlets, villages and pastures. There were tricky waterways to cross, and obviously harsh nights at “lower” elevations where a sleeping bag yet again became a must-have for a good night’s sleep. Because of this, deciding what to pack becomes evermore complicated. You can’t take everything. Crampons and ice axes weigh too much, but what happens if you need them? You have to be selective, clever and, as ever, get a big stroke of luck. We persevere, continuing our walk through unspoilt nature, motivated, curious and attentive as always. We encounter wild and rough places, we tread extraordinary and infinite landscapes, all the while reflecting on today’s recurring, dramatic topic of climate change (#climatechange).
The enormous respect that we have for the Planet informs how we act and how we trek. It is reflected in our careful selection of materials, in what we put in our backpacks and what is on our shopping lists both when we travel and when we are back at home. 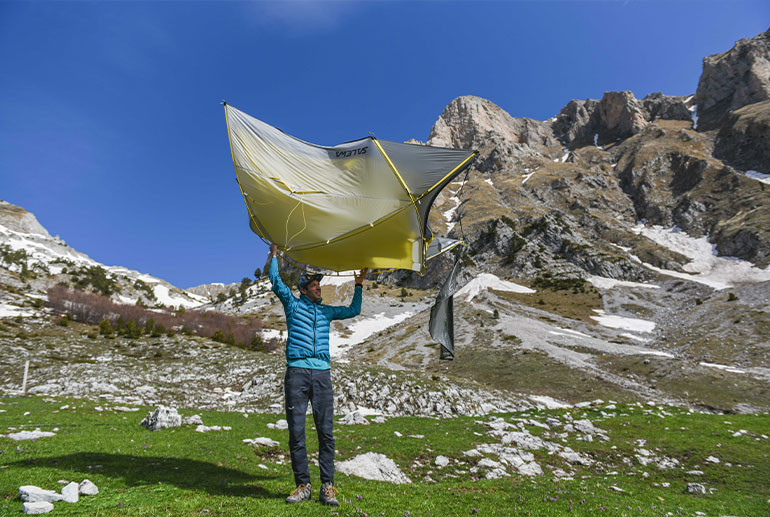 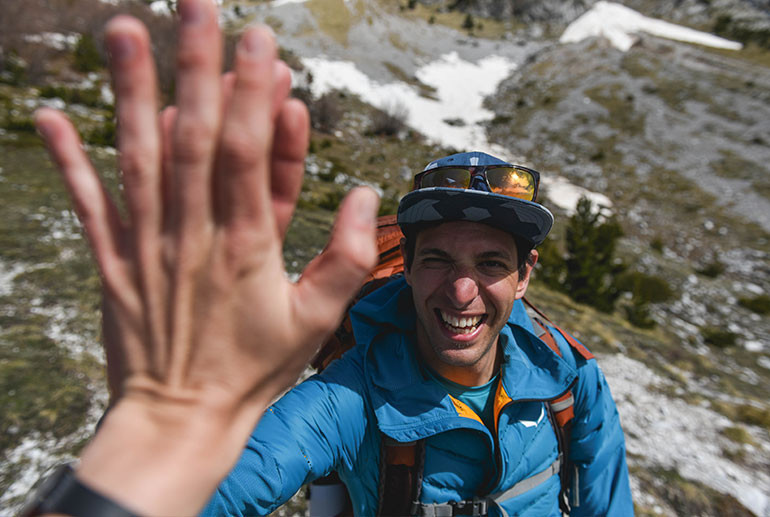 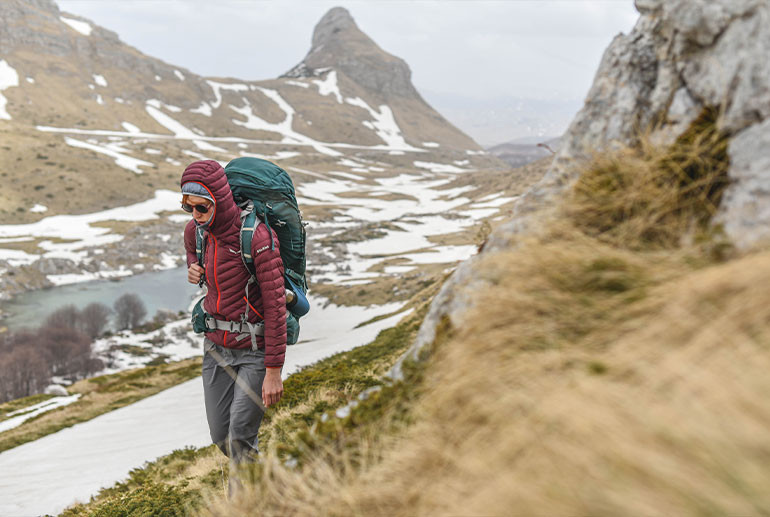