How it all began...
In the Spring of 2019, my friend and I were looking around in the Salewa store in Bergheim, Austria. It just so happened to be Women's Day that day, which to our pleasant surprise resulted in me getting a discount on my entire purchase - which left me grinning from ear to ear. While I was checking out, the sales advisor persuaded me to take part in their "Women in the Mountains" competition: I had never won anything before, but I thought the competition was a great idea. I know that with any chance I get, I'm out and about in the mountains with my friends.

After shopping and agreeing to take part in the "Women in the Mountains Challenge," it was back to my daily routine I went, not thinking of the competition anymore. In fact, I almost missed the email from the Salewa Customer Service team when it came through in April with the subject line of" "You have won! RE: Women in the Mountain - Congratulations!"

I couldn't believe it, I had actually won! A friend and I had been given the chance to experience a mountain tour with guide Stephanie Marcher. I had never won anything in my lifetime, so of course I was going to seize this once-in-a-lifetime opportunity. My dream: A natural wonder - discovery in the South Tyrolean mountains. So, our guide Steffi suggested a "Three Peaks walking tour" in the Sexten Dolomites. Little did she know, I had always wanted to go there!

The Sexten Dolomites are located in the northernmost mountain range of the Italian Dolomites. We wanted to do a small crossing with views across the northern side of the Three Peaks, which are located to the very east of South Tyrol.

On August 16th, my friend Renate and I set off on our journey from Upper Austria to South Tyrol. As we arrived in Mittersill, we were greeted with breakfast and Prosecco to get us in the mood for the incredible days ahead!

We finally reached Aufkirchen and checked into our cozy hotel where we spent the day following a path of meditation to the chapel. We then enjoyed the midday sun with ice cream and espressos in Toblach - now this is what you call a vacation!

Steffi phoned us later that evening to tell us what we would be doing the following day, which would be startting at 6:15 a.m. on Saturday. The hotel manager, Ferdi would be driving us three "Mädels" up the toll road - without his help, the tour would be too long for us to complete. We were served an evening meal was fantastic, the perfect fuel to give us energy for the tour ahead.

After a restful night, we awoke at 5:45am, surprised to find a full breakfast buffet prepared especially for us.

Saturday, 08/17/2019 – 6:15 a.m.
Our mountain guide, Steffi, was a phenomenal woman. She would be with us for the entire day, guiding us on this tour. Salewa had put a real mountain angel at our side so that Renate and I, (as Austrians) could find our bearings in the South Tyrolean mountains.

Auronzo - the Three Peaks: Our tour begins.
I was in complete awe of the feeling I had when I was surrounded by the mountains in the morning, we were practically the only ones at the foot of the Three Peaks. Immersing myself in this scenery, I was overcome with feelings of freedom, gratitude and wonder.
Our track led us past the Langalm, over the Dolomites Trail, to the Locatelli hut (trail 101). We soon caught a glimpse of the Büllelejoch hut where we planned to stop by later - but first, we had to reach the summit! We made our way up the Oberbachernspitz. However, we were only able to really conquer the summit after a large group of walkers cleared the last few meters to the cross. This throng of people felt somewhat strange to us, as up to that point, we had hardly encountered another soul. Steffi had thankfully organized our tour during a timeframe so that we didn't encounter any large crowds in the region. Finally, we made it and we could even see the Großglockner - the highest mountain in Austria. We could also make out the breathtaking Geiss, turning shades of red and yellow in the sun. There were just a few clouds in the sky - the perfect weather for our tour!
After we had taken a few photos, we headed towards the hut, where hearty South Tyrolean grub was waiting for us. The fascinating mountain landscape around us really recharged our batteries and we had the opportunity to experience the unique nature of South Tyrol in a truly picturesque setting. So, we braced ourselves for another descent and headed down past the Zigmondy hut that had llamas grazing at the side of its track. Unfortunately, we didn't have much time to stop and pet them as we still had a fair way to go down into the valley.

From the Talschluss hut to the Fischleinboden hut and still we continued downhill. At around 3:30pm, we finally caught sight of the bus stop - we had been walking for over six hours, I could hardly believe it. The bus took us back to Toblach, where Steffi had frtunately parked her car. She drove us back to the hotel - what a relief that we didn't have to walk any further! Although we felt wonderfully relaxed after a day in the fresh mountain air, the altitude had worn us out. We treated ourselves to some well-earned relaxation time in the hotel sauna and our delicious dinner brought us back to life, ready for our Sunday adventures.

Sunday, 08/18/2019
After breakfast, we checked out of the hotel and headed towards Lake Braies. A top tip from Steffi: "You simply have to go there, but get to the parking lot before 10 a.m!" The hike around the lake was heavenly. The crystal clear lake is surrounded by awe-inspiring mountain scenery, making the daily routine seem like a distant memory. After spending some time sunbathing on the banks of the lake, more people gradually started to arrive and, with regret, we set off on our way back home.
During these two days, we had the chance to discover a naturally beautiful region and meet some wonderful people  who gave us an insight into their home of South Tyrol. I would like to say thank you to Salewa for this incredible surprise. I am definitely going to take part in competitions more often now. 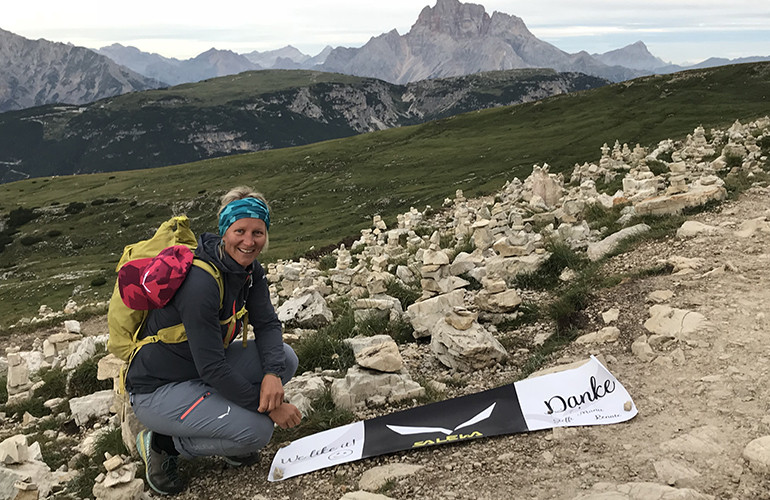 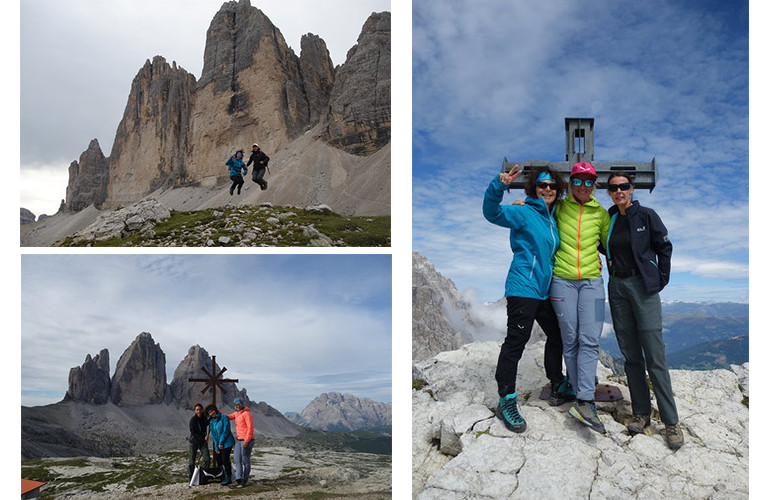 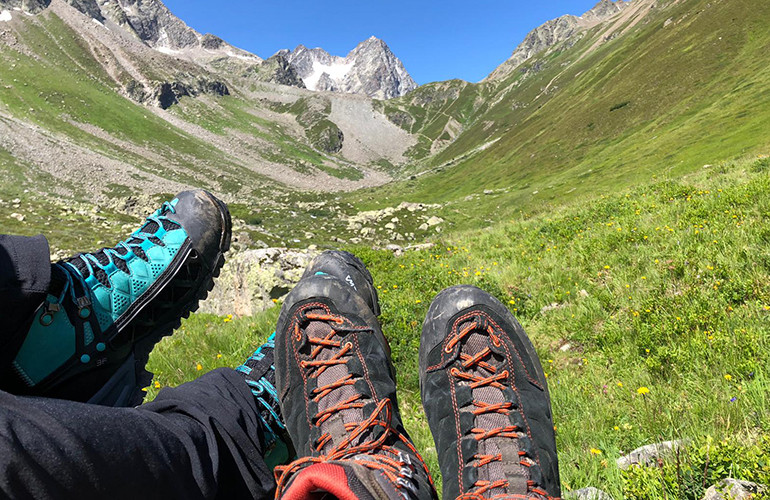